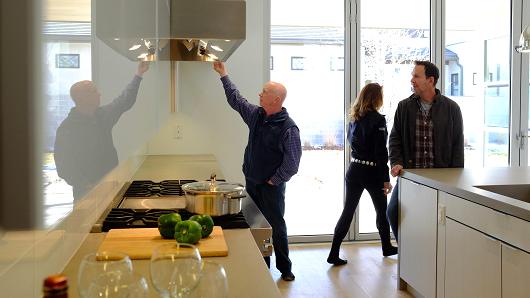 Sales of new U.S. single-family homes unexpectedly rose in October, hitting their highest level in 10 years amid robust demand across the country.

That together with last month’s increase in homebuilding and sales of previously owned homes suggests the housing market could be regaining momentum after treading water for much of the year. Housing has been constrained by shortages of homes for sale, skilled labor and suitable land for building.

Activity was also temporarily restrained by Hurricanes Harvey and Irma. Housing has been a drag on economic growth since the second quarter.

New home sales, which are drawn from permits, are volatile on a month-to-month basis. Sales surged 18.7 percent on a year-on-year basis in October.

Last month, new single-family homes sales soared 30.2 percent in the Northeast to their highest level since October 2007. Sales in the South increased 1.3 percent also to a 10-year high. There were also strong gains in sales in the West and Midwest last month.

More than two-thirds of the new homes sold last month were either under construction or yet to be started.

Despite the rise in sales in October, the inventory of new homes on the market increased 1.4 percent to 282,000 units, the highest level since May 2009.

At October’s brisk sales pace it would take 4.9 months to clear the supply of houses on the market, the fewest since July 2016 and down from 5.2 months in September. A six-month supply is viewed as a healthy balance between supply and demand.  To learn more about the state of the US real estate market contact a member of the 9 Core Realty team.