Buyer demand continues to fuel Florida’s housing market this month. As for-sale inventory continues to be tight, prospective buyers are responding by being prepared, pre-qualified and ready to make an offer when they find the right home. Realtors across the state report that many newly listed homes are selling quickly. In May, sellers of existing single-family homes received 96.4 percent (median percentage) of their original listing price, while those selling townhouse-condo properties received 94.7 percent – a signal that the listed price is extremely close to market value.

The statewide median sales price for single-family existing homes last month was $239,000, up 7.7 percent from the previous year, according to data from Florida Realtors research department in partnership with local Realtor boards/associations. The statewide median price for townhouse-condo properties in May was $178,000, up 8.1 percent over the year-ago figure. May was the 66th consecutive month that statewide median prices for both sectors rose year-over-year. The median is the midpoint; half the homes sold for more, half for less.

According to Freddie Mac, the interest rate for a 30-year fixed-rate mortgage averaged 4.01 percent in May 2017; it averaged 3.60 percent during the same month a year earlier.

To learn more about the current real estate market in Florida, contact a member of the 9 Core Realty team! 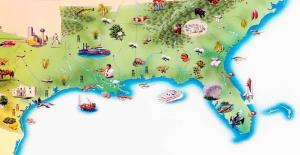 With rapid growth across markets in the Southeast, the region has emerged as a diverse, economic powerhouse, resulting in strong commercial real estate fundamentals for all property types. The Southeast’s rosy story is the result of a shift in both population and business growth from the Northeast and Midwest Rustbelt to Southeast markets, a reflection of the region’s desirability.

Located on Florida’s Gulf Coast, the Tampa-St. Peterburg market, which includes Hernando, Hillsborough, Pasco and Pinellas counties, is home to Port Tampa Bay, which has helped to define the region as a logistics hub. It is Southwest Florida’s economic anchor, with active defense and security industries and a strong financial services sector. In fact, Tampa is home to 10 percent of the nation’s Fortune 50 shared-services operations.

Moody’s predicts that growth in the Tampa market will keep pace with the rest of nation, as the area reaches full employment. An average 2.1 percent annual growth in employment is already putting upward pressure on wages and resulting in economic acceleration.

The region’s biggest challenge in attracting business is the lack of a modern mass transportation system. The Tampa Bay Express, a program aimed at modernizing Tampa’s infrastructure and building a comprehensive regional transportation system, along with establishment of cross-bay ferry services, should help the market overcome this deficiency.

Demand for commercial properties here has accelerated in recent years, with sales volume reaching nearly $6.3 billion in 2015, but then slowing in 2016. While investors remain cautious, Tampa is a growing market with competitively priced assets and high-yield opportunities, noted a recent CBRE report.

To learn more about the Florida real estate market contact an expert member of the 9 Core Realty team.

But the total value of property in the county is still about $10 billion behind what real estate was worth a decade ago, right before the Great Recession.

Fort Myers had the highest percentage increase of the municipalities with almost 8.1 percent, closely followed by Cape Coral’s 7.9 percent. San Carlos Fire District’s 9.4 percent was the largest increase of districts that use property taxes to raise money.

The figures are the first look that local officials get at how much property values increased. The increased valuation means more money can be raised by keeping taxes at the same rate or even lowering the rate to receive the same amount of money next year.

The total value of property in Lee County as of Jan 1 was $103 billion. After exemptions and other allowances, the total taxable value is $72.3 billion.

New housing developments east of Interstate 75 along Bonita Beach Road and other projects account for $214 million of the increase, compared to an increase of $339 million to Bonita’s taxable value in the 2016 tax year.

Growth is picking up in Cape Coral. Florida’s 10th largest city added almost a billion dollars in taxable property over the last year.

At 7.87 percent growth, the city went from $12 billion to just shy of $13 billion in taxable property values. Fueling that growth, in part, was $277.5 million in new construction. That’s $80 million more in construction than in 2015.

Estero had the lowest percentage increase of any municipality in the county at 4.64 percent.

Even so, the preliminary reports shows the village with a $283 million increase from 2016, bumping the total taxable property in the village to $6.38 billion.

New construction of homes and businesses account for more than half of the increase.

New development, the village’s location and the continued increase of people flowing into Southwest Florida all play a part in increasing property values.

Total taxable value at Fort Myers Beach increased 4.84 percent, to $3.2 billion, an increase of about $150 million compared to the previous year.

Property values increased for the fifth straight year in Fort Myers. By percentage, the Fort Myers tax base grew more than any other municipality in the county

The city of Sanibel, which has the lowest property tax base in the county, had values increase by 5.87 percent.

Total taxable property values in the city is just over $5 billion, a 5.87 percent over last year.

To learn more about property values throughout SWFL contact a member of the 9 Core Realty team!

At the end of the first quarter, inventories fell to their lowest levels since the beginning of the recovery and fell to a 3.8 months’ supply by the end of March.

By April, tight supplies reached a point where they started crippling sales, which fell 2.4 percent. On a national basis, the total supply improved slightly in April, but the national inventory is still 9 percent below last year’s level, which was below the year before.

We are now in the third year of an inventory drought that echoes conditions at the peak of the boom 10 years ago.

National numbers are only aggregations of hundreds of markets, and they may be masking what’s going on at the ground level where people buy and sell homes.

One out of 10 of the nation’s 100 largest markets had larger numbers of active listings at the end of March than they did 12 months earlier. Some of them aren’t doing as well as they normally do, and are barely in the black. Two are flush with properties.

Why are some markets missing the misery and others are not? What can these fortunate metros tell us about how to cure the drought that has left the housing recovery dry and barren? Do they hold the key — or even clues — to a national inventory recovery?

Drawing on Q1 inventory data from realtor.com, which carries about 1.4 million active listings, 12 of the nation’s 100 largest markets report an annual increase in listings.

The multiple listing services for two markets, Denver and Pittsburgh, reported that their positive investor counts had turned negative in April, so they were eliminated from the list.

A cursory look at the list rings some bells. Palm Bay, Florida; Las Vegas; Cape Coral, Florida and Fresno, California; were all epicenters of the foreclosures that shook real estate markets following the housing bust in 2007.

Thousands of homes became rentals and diminished the stock of ownership properties. The inventory of single-family rental houses grew dramatically to 12 percent of all housing units in 2015, up from 9 percent in 2006. The vast majority of these are owned by small investors with fewer than 10 rental properties.

The Texas cities of Dallas, Houston, Austin and McAllen along with Tulsa, Oklahoma, are in a similar situation. They are centers of the oil industry boom (created by new technology like fracking) that took off in 2011. The boom created a large demand for housing.

Austin’s housing shortage was also generated by a boom in its technology industry. With the decline in oil prices, employment had fallen and housing demand had diminished temporarily, which helped inventories recover.

Sales are down 8.53 percent in Tulsa, and the decline in home values hit the housing market hard in McAllen. Today, McAllen ranks third in the national growth of underwater mortgages, up by 7,746 homes in the last quarter.

However, in addition to layoffs, positive inventories in Texas and Oklahoma owe more to another force: new construction.

The housing recession devastated homebuilders, and it has taken years for them to restock their supply of land and labor. The oil boom gave Texas builders a three-year head start in advance of the national housing recovery.

With fewer regulatory constraints than most other states and more time to ramp up production, Texas now leads the nation in permits issued and housing starts, which in April were up 26.7 percent quarter-over-quarter, the strongest showing in more than a decade.

Quarterly starts were up 4.6 percent in Dallas, 5.3 percent in Houston, and 5.8 percent in San Antonio. April new home sales in Austin, Dallas-Ft. Worth, Houston and San Antonio rose more than 17 percent over 2016.

MLSs serving markets like Dallas and Houston may also carry more new home listings in their inventories than other MLSs because of the success of HomesUSA, a platform for real estate agents to publish and manage builder inventory on the MLS.

To learn more about current real estate trends in Cape Coral, FL contact a member of the 9 Core Realty team!