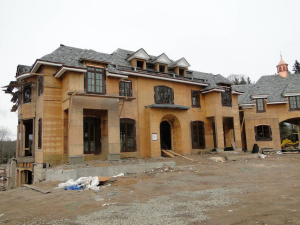 More single-family homes across the nation are being built for renters, a shift that mirrors a steady decline in homeownership in the years since the housing bust.

Until recently, real-estate investors had focused primarily on scooping up tens of thousands of foreclosed homes, at a sharp discount, and converting them into rental properties. Now that the pool of these properties has declined and prices have risen, these investors are snapping up newly finished single-family homes to be used as rentals, or even developing vacant lots from the ground up.

Last year 5.8% of the 535,000 single-family homes started were being built as rentals, up from 4.8% in 2011 and the highest share since at least 1974, according to an analysis of census data by the National Association of Homebuilders. From 1974 to the home-price peak in 2006, only about 2% of single-family homes were built for rentals.

For investors, the interest in new homes reflects their belief that the rental market will continue to see strong demand and rising rents. While there is little data for the level of single-family home rents, apartment rents have shot up 11.3% since 2009, according to Reis Inc. Overall, about 15 million of the nation’s single-family homes were rentals last year, up from 10.8 million in 2005, according to Zelman & Associates, a research firm.

Meanwhile, foreclosures and other distressed sales accounted for less than 15% of all home sales in June, down from 21% a year earlier and 33% at the peak of the housing bust in early 2009, according to CoreLogic, a data firm.

The new homes-turned-rentals can be found both in new subdivisions or built on lots in long-standing communities.

Building new rental homes undercuts part of the thesis of investing in single-family rental homes. Investors were attracted to this market largely because they could buy houses for less than the “replacement cost” or how much it would cost to build a new home.

But investors say they can still make profits. They point out that new homes typically come with builder warranties and cost less to maintain, at least in the initial years of ownership. Also, the cost of building a new home is relatively low these days if lots were purchased on the cheap.

To learn more about the development of land lots for sale for new construction single family rental homes, contact a member of the 9 Core Team today!