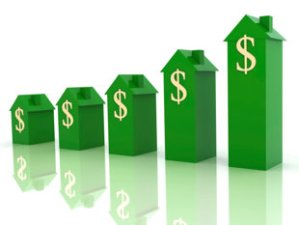 U.S. home prices increased at a faster clip in November, the gains fueled by solid hiring growth, historically low mortgage rates and a shortage of houses on the market.  The Standard & Poor’s/Case-Shiller 20-city home price index rose 5.8 percent from a year ago, up from a 5.5 percent pace in October, according to a recent report.

Home values nationwide have nearly returned to their July 2006 peak, as the real estate market has slowly recovered from the housing bust that triggered the Great Recession. But several metro areas have fully rebounded from the downturn.

Four metro areas — Dallas, Denver, San Francisco and Portland Oregon — have either matched or eclipsed their all-time highs, while Charlotte, North Carolina, is less than 1 percent below its previous high.  No Southwest Florida city is included in the Case-Shiller index, but Tampa and Miami are, showing gains of 6 percent and 8.1 percent year over year, respectively.

By another yardstick, home prices in this region also continue to climb. Data from the trade group Florida Realtors showed that buyers paid a median $253,650 for a single-family home in Sarasota-Manatee in December, a 16.4 percent increase over the year.  This increase was also seen in the ride of Florida land sales. In Charlotte County, homes traded for a median $180,000, up 21.6 percent.

Buyers crowded back into the housing market last year. Sales of existing homes rose 6.5 percent over the year to 5.26 million, according to the National Association of Realtors. More Americans have been able to purchase homes as employers have added 2.7 million jobs and borrowing costs have remained low. But the number of available listings has fallen 3.8 percent from a year ago, causing tight inventories that have fueled escalating prices.

The dearth of inventory has really taken its toll on the market. Homebuyers this year are motivated but not desperate, and they refuse to overpay. Without more listings, what we’ll see are higher prices and lower sales volumes, a lousy way to start a new year for homebuyers.

The rising prices have created some affordability pressures — down payments have fallen as a share of the purchase price even as they have increased in absolute terms.

For a conventional 30-year mortgage, the average down payment was 17.46 percent of the purchase price in the October-December quarter. That is down from 17.63 percent in the prior quarter, according to a recent report by LendingTree, the online loan marketplace.

The challenges caused by rising home values have been offset somewhat by falling mortgage rates in recent weeks.